skip to main | skip to sidebar

Madeline is our hero! 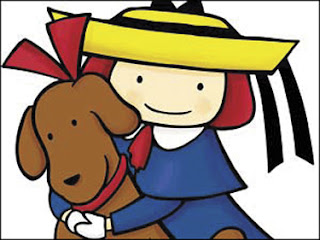 For Christmas, Santa surprised my girls with a DVD collection from the Madeline Series. This children's show is based on the books by Ludwig Bemelmans. The first Madeline book came out in 1939. After much success, Bemelmans wrote several more, creating a series of Madeline adventures. In 1989, DiC Enterprises adapted the first Madeline book into an animated television special for HBO and in the 90's, Madeline appeared as a regular Saturday morning cartoon on ABC. In 1995, the show was renamed, "The New Adventures of Madeline." It won a Daytime Emmy Award for Outstanding Children's Animated Program. The New Adventures of Madeline was shown on KOL's Secret Slumber Party between Fall 2006 and 2007.

In our house, Madeline is especially near and dear to our hearts. Big Sister feels a special kindred with the perky redhead who is a peanut in size, but big on the inside, always striving to help others in need and do her very best. Our DVD collection includes 7 CD's with two episodes on each. We've been watching one every night since Christmas and no one has gotten tired of them yet! Madeline is an inspiration and good role model for all little girls from New York to Paris, Beijing to LA. She teaches young girls that they can be strong and assertive while still being feminine and pretty.
Posted by Ashley Winters at 8:14 PM

Oh how I love the Madeline books, even now, even though I am 25. Love.

we have read a few books but I don't think we have seen the show... We will have to look into it, thanks for the recommendation.:)

Welcome to my blog

Ashley Winters
A single mother of two looking for normalcy in a crazy world.

Although this is a public blog, Ashley Winters is not my real name. To protect the identity of myself and my children, I use this pen name and refer to my daughters as Big and Little Sister.

"The loving kindness shown a child is like water and shall be repaid drop by drop."